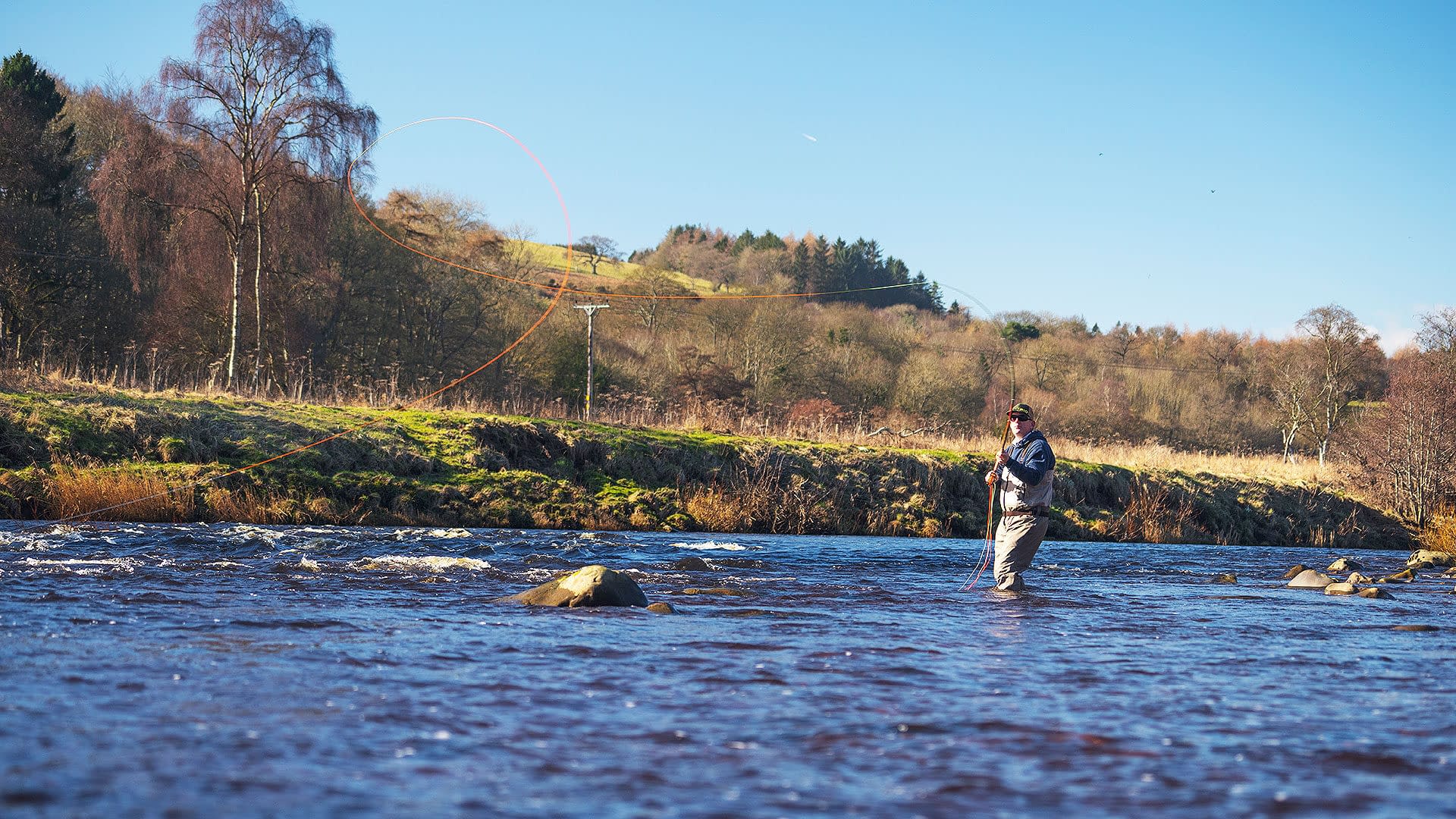 Tyne Salmon Fishing – The River Tyne system is widely recognised as the premier salmon and sea trout system in England. The main river is formed by the confluence of the North Tyne and the South Tyne at Warden near Hexham.

The popularity of salmon fishing on the Tyne system increases year on year. The river system has earned an enviable reputation due to its prodigious run of salmon and sea trout. The 10 year average, based on Environment Agency counts at Riding Mill, indicates an average of 32,000 migratory fish running the system each year.

Early Spring salmon fishing on the River Tyne itself is focused on the lower beats including Bywell and Styford. The Riding Mill fish pass acts as a temperature barrier in colder and higher flows, slowing upstream migration. Fish can be encountered in the lower river from the opening day of the season (Feb 1st). As the water warms, usually by mid-March, fish begin to ascend the pass at Riding Mill, also populating the rest of the main river to the pools around Hexham, including beats at  Dilston and Warden.

From then on until well past the end of the season (31st October) fish can enter the river on every tide. Runs of salmon and sea trout arrive throughout June, July, August, September and October by which time all of the better pools in the system will hold a good head of fish some donning their spawning colours by then. Salmon fishing on the River Tyne continues until 31st October with some fresh fish still running until the final day of the season. 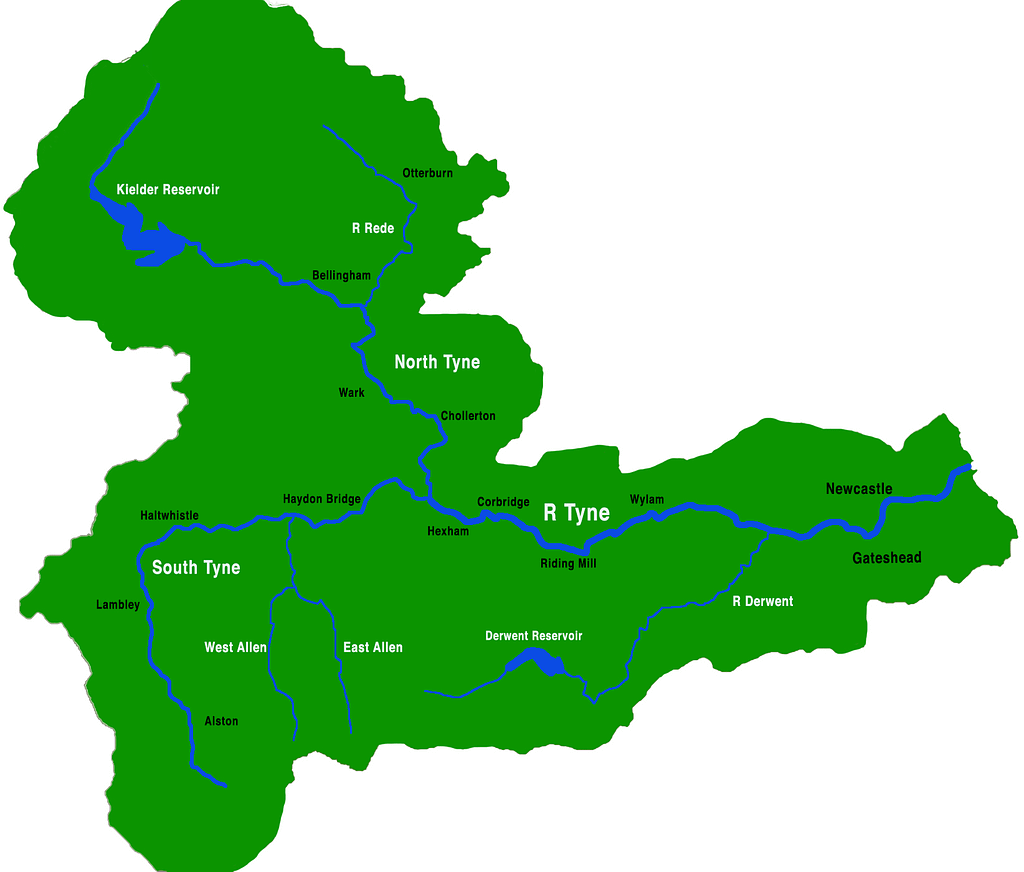 The North Tyne is around 30 miles long and is fed by both local rainfall and releases from Kielder reservoir. The water carries a peat stain which should not put anglers off as it doesn’t put off the fish. There are many beautiful fly runs and pools to fish with numerous features and large rocks providing lies for fish and targets for the angler who can read the water. Some pools are large and will be best covered with a longer fly rod. The angler packing both a 13ft and 14ft rod will be well covered for most eventualities.

The wading on some pools can be challenging. A guide who knows the pools can be a great advantage and a stick and lifejacket are a must, but the fishing is classic flyfishing and fighting a large salmon in water full of obstacles, fast runs and large boulders is something that certainly gets the heart pumping! Fish of over 30lbs are caught most years.

Fishing in the lower North Tyne can be productive from May given water but from June onwards both salmon and sea trout will start to appear throughout the lower and middle river with beats at Warden, Chesters, Chollerton,and Haughton Castle amongst others providing excellent opportunities for sport. Sea trout catches will usually peak in July and August with hard fighting fresh fish attacking a well presented fly by day or night depending on water heights.

By August most of the main pools will hold fish and these will continue to fill up with running fish arriving through September and October. Most rods will fish a floating line with a variety of sinking tips and tubes of various weights or dressed doubles to suit water conditions.

The South Tyne is around 25 miles long and is a true spate river that can rise and fall extremely quickly. Anglers fishing a falling river with the water the colour of weak tea can enjoy tremendous sport on the fly with both salmon and sea trout. Night time fly fishing for sea trout into double figures can be thrilling sport in low, clear water under the cover of darkness with fish starting to move as the light fades on a Summers’ evening.  Fly rods in the 13ft region will cover most pools and there is some stunning fly-water and scenery to enjoy.

Much of the river is controlled by associations and syndicates but access to beats at Warden and Lambley include some beautiful and productive fly water.

Prime months are from May/June onwards and again, most rods will fish a floating line with a variety of sinking tips and tubes of various weights or dressed doubles of various sizes to suit water conditions for much of the season.

The river Derwent flows for about 35 miles through County Durham and Northumberland meeting the main Tyne in its’ lower reaches near Gateshead. As it flows out of the Derwent reservoir its’ levels and temperature are somewhat regulated and it enjoys good hatches of an array of insect life including various olives, sedges, stoneflies, midges and a good Mayfly hatch usually around late May and early June. There is also a range of terrestrials to keep the fish looking up.

There is a good head of wild brown trout and grayling and some brown trout are stocked in the upper reaches. Fish can be caught year round in the deeper pockets on nymphs but fish will rise freely during a decent hatch which can usually be relied upon from May onwards. At these times traditional wet flies and dries are an exciting way to fool the fish.

There is a range of sizes with the better fish often presenting a challenge requiring a stealthy approach, accurate casting under the  tree canopy and good drifts.

Rods 7-9 feet in length rated for 3-5 weight lines will work well. For Czech nymphing during the winter for Grayling a longer rod to 10 ft can be useful.

You can get in touch using the contact details below or by completing the online form in the Contact Me page.

We use cookies on our website to give you the most relevant experience by remembering your preferences and repeat visits. By clicking “Accept”, you consent to the use of ALL the cookies.
Cookie settingsACCEPT
Manage consent

This website uses cookies to improve your experience while you navigate through the website. Out of these, the cookies that are categorized as necessary are stored on your browser as they are essential for the working of basic functionalities of the website. We also use third-party cookies that help us analyze and understand how you use this website. These cookies will be stored in your browser only with your consent. You also have the option to opt-out of these cookies. But opting out of some of these cookies may affect your browsing experience.
Necessary Always Enabled

Any cookies that may not be particularly necessary for the website to function and is used specifically to collect user personal data via analytics, ads, other embedded contents are termed as non-necessary cookies. It is mandatory to procure user consent prior to running these cookies on your website.